Yangon is a big and Myanmar’s metropolis populated over five million and the main gate way of the country both land and air transportation. Beside this, Yangon is a big and yet not modernized city, with Victorian buildings, tree-lined avenues, lakes and parks and a bustling city center of friendly vendors, colorful stalls and people going about in their daily chores dressed traditionally in their Longyi and flip-flap sandals. The Bogyoke Aung San market (also called Scott’s Market) is a must for every visitor and so is the magnificent Shwedagon Pagoda – the prominent landmark of Myanmar. The first fundament of the Shwedagon is believed to have been built more than 2000 years ago, and the pagoda is revered by Buddhist and non-Buddhists alike.

How to get to Yangon Bagan is a small town and famous of ancient Temples for Murals, Buddhism, Status, art and architecture on the bricks, it always occupies highly the to-see list of a visitor who will see unique shaped temples outside which are peanut and sesame plantations, browsing cows and dirt roads. There is panoramic view of sunset and sunrise from high temples and short and romantic drifts on the Ayeyarwaddy at the sunset time always favorite option. About three miles outside of the old town, lie New Bagan and Nyaung U where lacquer ware workshops and bazaar with curio sellers are seen and restaurants with different food options and accommodation are available. There are also recommended, posh hotels in the old town which offer guests with gorgeous view over the Ayeyarwaddy beside which they are located.

How to get to Bagan Mandalay is the second largest city in Myanmar and the last palace of Royal Burma from 1859 to 1885 when British captured it a at the end of the third Anglo-Burmese war, and turned, under the British colonial rule, to a modern city shaped a grid. Now a days it is populated with over one million and there is a lots to learn and experience in Mandalay like historical sites, monasteries, pagodas, handicraft, cruising and ballooning. A few miles outside the city of Sagain, Pyin oo Lwin, Innwa and Mingun which are offers the historical culture and local life sightseeing.

How to get to Mandalay

Monywa city located 136 km north-west of Mandalay on the eastern bank of the River Chindwin. It is also known as Neem city because most of the streets of the city cover with old Neem trees. It is unique cities of the world. Monywa offer some unique sightseeing which mostly lays outside of the city is covered with Neem trees and numerous tall tamarind tree. There is wide land rich of copper just in the west outside of Monywa and on the other side of the Chindwin River, copper mining is performed there and it is just for story to hear it. Most of tourist to visit Monywa from Mandalay and Bagan which are just three and four hour drive.

How to get to Monywa Pyin Oo Lwin located 67 km east of Mandalay and 3510ft of sea level and populated with around 255,000 in year 2014.It’s a well-known place for flowers in the Botanical Garden now called as National Kandawgyi Garden, waterfalls, beautiful buildings left from British old colonial time of a church, a mixture of ethnicities and hill station which give us useful of railway Gohteik viaduct. Like other places in the country, it became a planned town, named as Maymyo after Colonel May of the 5th Bengal Infantry, and quickly gained fame due to the beauty of the surroundings and very humble heat even in the Burmese humid summer, and was promoted to a summer capital by the British during their rule. Now a days, Gohteik viaduct is connected to the northern Shan State of Hispaw which is famous of trekking in Shan & Palaung trial villages.

How to get to Pyin Oo Lwin This lake surrounded by the Hills and mountain of Shan Mountain Range. It is located on Shan state and the second largest lake in Myanmar and 44.9 square miles (116Km2) and 2900 ft of sea level and mostly increase to 5 ft in Rainny and deepest point to 12 feet in summer season. Inle Lake is combined and home of communities of tribes which include Innthar, Shan, Paoh, Danu, Burma and so On. There is famous Inntha fishing life and rowing boat with one of the legs and floating garden for tomatoes and busy in taking underwater weeds and plants out of the water to use them in their famous floating garden. Overall, the culture, communities and ecology of the lake are attracting people from around globe form their busy city lives. There is go to Sagar, Indein which are the famous tourist attraction places.

How to get to Inle Lake A Hill station in Myanmar and located at 4300 ft (1320 metres) above sea level. Kalaw is famous of pine tree city in Myanmar and good to travel in winter since it has chilly weather from November to February in yearly. Most of traveler will join trekking to explore the local life and walking tour around in Kalaw for ethnical village of Palaung, Paoh ,etc.There is ecotourism in Kalaw for Elephant to make paper from elephant’s excrement, it is good for student to study it.
Kalaw also rich of fruits, flowers and hills where there are myriad of tribes living quietly and there are a number of trekking paths to cross the woods, planation and villages.

How to get to Kalaw Bago is capital city of Bago Region of Myanmar and it is located 91 km north –east of Yangon. It is also known as Hanthawaddy. In our Myanmar history, it had been a historical city in the 16th century polities of local feudal monarchs who employed Portuguese soldiers in their militaries. The present-day Bago is a popular pilgrimage site for Myanmar Buddhists who like to pray and meditate at Buddhist pagodas and monasteries in the town.

How to get to Bago It is famous of holy site in Myanmar, a well –known Buddhist pilgrimage site in Mon State. It is a small 7.3 metres (24ft) build on the top of a granite boulder covered with gold leaves pasted on by its male devotees. According to Legend, it is precariously perched on a strand of the Buddha’s hair. The balancing rock seems to defy gravity, as it perpetually appears to be on the verge of rolling down the hill. The rock and the pagoda are at the top of Mt. Kyaiktiyo. Another legend states that a Buddhist priest impressed the celestial king with his asceticism and the celestial king used his supernatural powers to carry the rock to its current place, specifically choosing the rock as the resemblance to the monks head. Local Buddhists believe that the rock has hosted hair relics of Lord Buddha for thousands of years while its holiness began to appear in the local literature in the 19th century. The miracle of nature, panoramic view, and cool breeze at the hill top and the pleasant duration in the crowd of Buddhist pilgrims who chant and light candles form fame of the Golden Rock in the Myanmar’s tourism industry.

How to get to Kyaikhtiyo

We recommend to take the bus/ rent a car or a tour bus from Yangon. It you are taking high way express bus, you may need to take Kyaikhto Bus and stop the base camp of Kim Pun Bus Station. The ride generally takes about five or sixth hours along the nice road to Kin Pun Base Camp of Golden Rock and it can be stretched out longer added some sightseeing if you are on a private tour. From there, you may need to take public bus to top of mountain. Mawlamyine is formerly named also Moulmein is the fourth largest city in Myanmar and 300 km south east of Yangon and 70 km south of Thaton at the mouth of Thanlwin River.
It is also capital city of Mon State, dominated by Mon Ethnic people, in southern Myanmar named as Moulmein by British in the colonial period and having served as the colonial capital of the Lower Burma in the 1830s, it was the first Burmese city having had a contact with Victorian modernity, European habitants, substantial Christianity, and market economy that also included trade with the West. Mawlamyine has been stepping into tourism with its history and culture sightseeing for tourist.

How to get to Mawlamyine Hpa- An is the capital of Kayin State and populated is 421575 in the year of 2014 and most of ethnical in Hpa An is Karen ethic people.It is 50km away from Mawlamyine. It differs from other places of Myanmar as a capital of Kayin/Karen ethnic state which comprises about eleven tribes of Karen. Like Mawlamyine, Hpa-an is still one of the off-the-beaten-track towns for tourism, having a limited number of tourists since 2011. The atmosphere in the town is both peaceful and energetic with nearly half a million population. Its surrounding area has sacred hills and natural limestone caves mostly decorated with Buddhist sculptures and statues. Some human settlement on certain islands forms seasonal plantations which guarantee the population with the simple economy. At the present, Hpa-An is famous for Cave around this city.

How to get to Hpa An Mrauk U is the capital of Mrauk U Township and a sub region of the Mrauk-U District. From 1430 until 1785, it was the capital of the Mrauk U kingdom, the most important and powerful (Rakhine) kingdom.It has many temples and ruins always emit attraction that bring people in to see them and hear history. The grand history began in the 1430s when established as a kingdom and went along until the Burmese conquest in 1784 forming a change of rulers. Located in the due west of Myanmar, geographically close to Bangladesh, Mrauk U nowadays is a quiet, isolated town with important archaeological remains, and a fine destination for touring.

How to get to Mrauk U Ngapali is located at southern part of Rakhine State and is a famous beach in the world. Most of tourist are enjoy the white sand of beach is very famous of tourist people.To get Ngapali, we have to take flight to Thandwe airport.Without visit Ngapali beach in Myanmar, you will have to back Myanmar for once time to Myanmar. Ngapali beach is should join among in Myanmar tourist place.

How to get to Ngapali Dawei is a city in south-eastern part of Myanmar and capital of Thanithargi Region and populated with 139,900 in year 2004.Dawei is a port of the head of Dawei River estuary 30km form Andaman Sea and one of the Myanmar 135 ethnic minorities. Dawei also located of Myanmar along the long coastline includes numerous white-sand beaches most of which are untouched, a bit peculiar food rich of sea products and pretty pictures of fishing economy existed in the sea-side villages. As a usual item in Myanmar, Buddhism in Dawei is also to experience in easy access as lots of monasteries allow visitors a chance to closely view the Buddhist learning of monks in their compounds. The clean feel in the town is something to be appreciated as well. A two-day time is sufficient for vacationers to have a proper visit in and around Dawei.

How to get to Dawei Myeik was the southernmost part of the Pagan Kingdom between the 11th and 13th centuries. After the Pagan Empire's collapse in 1287, Myeik became part of successive Thai kingdoms from the late 13th century to the middle of 18th century: first the Sukhothai Kingdom and later the Ayutthaya Kingdom. A brief period of Bamar rule interrupted this between 1564-93. In the very south of Myanmar, Myeik hosts all archipalegoes, numbered officially more than 800 islands lying off the western shore in the Andaman Sea. They geographically feature limestone and granite and are rich of rainforest and beaches. Some of them have been in travel industry since 1997 and have hotels. Myeik is famous of diving in Andaman Sea and Myeik Archipalegoes.It is should not miss to visit Myeik also.

How to get to Myeik 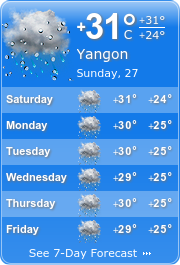